Some of the world's best racing drivers will be in action from 8th - 10th May 2020 at the Formula 1 Spanish Grand Prix. Vroom vroom!

The Spanish Grand Prix 2019 will be held from 8th – 10th May 2020 at the Barcelona-Catalunya circuit near Barcelona.
All of the details and practical information you might need are given below.

The Spanish Grand Prix is one of the many competitions which form part of the Formula 1 world championships.
It includes around 20 races, where you’ll be able to see some of the world’s best drivers in action. Lewis Hamilton, Fernando Alonso, Nico Rosberg, Daniel Ricciardo and Romain Grosjean were all present last year. The event should be just as spectacular this year!

What happens at the Spanish Grand Prix, and how you can see it

The different stages of the Spanish Grand Prix

The big final race of the Spanish Grand Prix will be held on Sunday 10th May at the Barcelona-Catalunya circuit in Montmeló, 20km from Barcelona itself. Various other races will be held on Friday 8th and Saturday 9th May, including training and qualifying races used to determine the starting order for the grand final.

There are more than ten grandstands on the circuit, and around 35,000 places on the pelouse (lawn). The track layout is shown below. 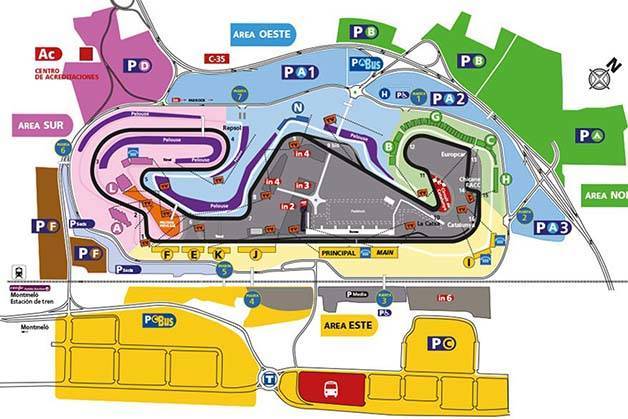