The Sant Jordi festival in Barcelona, a literary, flower-filled 23rd of April

Sant Jordi is one of our favourite Catalan festivals. On this day, roses and books flood the streets of Barcelona. Follow us to find out more!

In 2019, the Sant Jordi (Saint George) festival falls on a Tuesday, so there will be less people and you will have the opportunity to enjoy this romantic, cultural, lively and historical Catalan festival.

The origins of the Sant Jordi festival

The legend of Sant Jordi states that around Barcelona a dragon once terrorised the population. Once in a while a person was plucked out and delivered to the animal to appease it. When the king’s daughter was chosen she found on her way a knight named George who decided to take her place and fight the beast. When he managed to cut off its head, roses poured out. “Sant Jordi” is now considered the patron saint of Catalonia. 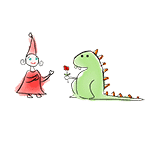 23rd of April 1616: the death of Cervantes and Shakespeare

On the 23rd of April 1616, two great literary figures were lost: Cervantes and Shakespeare. Which is why it is also traditional to offer a book to your loved ones, sometimes in exchange for a rose.

Sant Jordi  is often compared to Saint Valentine’s day, but while this is the festival of lovers, Sant Jordi is more an occasion to exchange gifts among family and friends.

The 23rd of April is not a holiday in Catalonia. On the years when it falls during the week, it is celebrated during breaks and after work. It’s worth experiencing at least once in your life the particular friendly atmosphere of Sant Jordi in Barcelona. The city is carpeted with flowers and books, and creativity abounds in the streets. Shops and stalls even compete in originality. 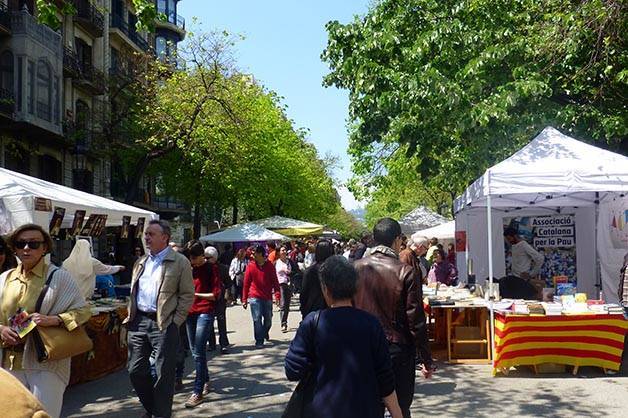 The Ramblas, Passeig de Gràcia and Rambla Catalunya are the epicentres of this intergenerational event so they are swamped with people. If you don’t like crowds then avoid these areas and any of those participating in the festival!

Lots of events are traditionally organised: you can meet authors, there are conferences, open-doors at Barcelona city hall, exhibitions, classes and workshops for adults and children, blood drives and competitions, etc.

To see more information about this day, head to the barcelona.cat page dedicated to Sant Jordi. Information is in Spanish, Catalan and English.