20 interesting Barcelona facts you did not know

Discover the weirder side of Barcelona with these 20 little-known facts you can dazzle your friends with! 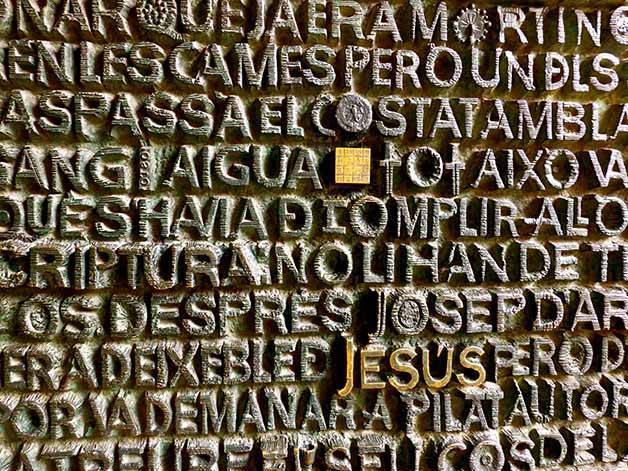 Barcelona is a city full of secrets and weird anecdotes, as we’re about to show you with these 20 facts you probably didn’t know. Ready to see another side of Barcelona?

Many cubes containing 9 or 16 figures are etched on the facade of the Passion of the Sagrada Familia. They aren’t sudokus, but an homage to Christ: The sum of the rows, columns and diagonals is always 33, the age of Christ at the time of the crucifixion.

2. The twin towers of the Plaça Espanya

The twin towers that adorn the Plaça Espanya are nicknamed the “Venitian Towers” as the architect Ramón Reventós was inspired by the campanile of Saint Marc’s basilica when designing them.

In the Gothic district it is possible to see the stone head of a women at the corner of dels mirallers. This head, called “carassa” was supposed to remind and inform everyone (including those who couldn’t read) that a brothel was located in the area. 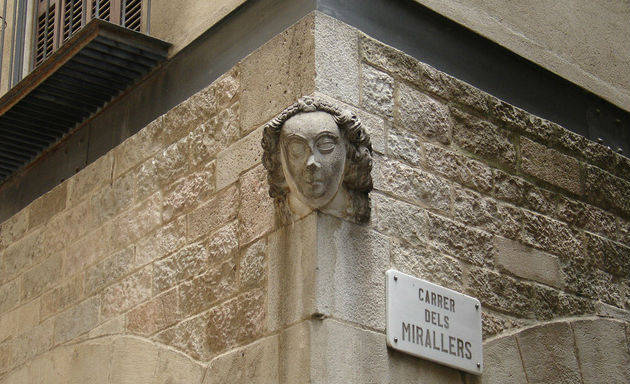 4. The gargoyles of the Cathedral

Barcelona cathedral is decorated with numerous gargoyles in the shape of elephants, licornes and other animals. It is said that some of them are witches who were to stoned for not having respected the Corpus Christi.

The Wallace fountains, easily recognisable as they are dotted with women dressed in long tunics, were created for the streets of Paris. The sculptor designed 50 of them, 12 of which were were donated to Barcelona. Only two remain today: one on the Ramblas opposite the wax museum, and the other at the corner of the Gran Vía and the Passeig de Gràcia.

6. The second biggest square in the world

The Plaça del Fòrum is the second biggest square in the world, after Tian’anmen square in Beijing. It is covered by a large photovoltaic cell the size of a football pitch. Impressive, no?

The superb Casa Milà (also known as the Pedrera) was loathed by many when it was first built, as they compared it to an aircraft hangar or a mona de Pascua (a typical Catalan Easter cake). It seems that George Clemenceau, who came to Barcelona to give a speech, was dismayed at the sight of Gaudí’s work. Legend even has it that he was obliged to leave without giving his speech. 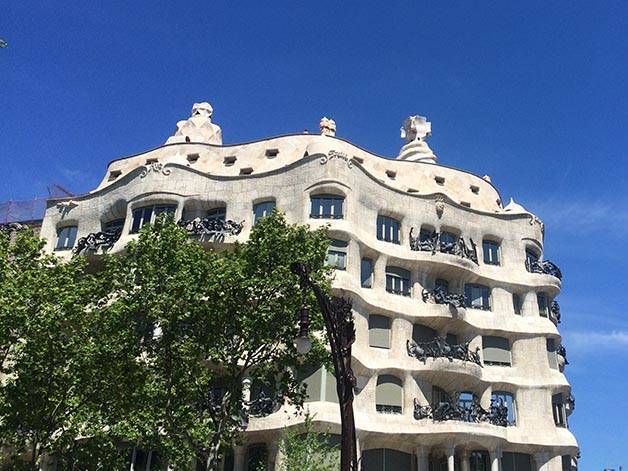 8. The oldest fountain in Barcelona

The oldest fountain in Barcelona is located in the Gothic quarter in the Plaça de Sant Just (here you’ll find the café-restaurant Bliss). It is designed in a purely Gothic style, with three faces of man and an eagle catching a partridge (homage to the hunt, one of the favourite past times of the commissioner of the fountain).

9. The Ramblas and Barça

The Canaletas fountain located above the Ramblas, is the meeting place for fans to celebrate Barça victories. And it’s no accident: the sports newspaper La Rambla, based just a few metres from the fountain used to write the updated score on a large slate that was visible from the street. It no longer exists, but the post-match tradition remains.

Legend has it that if you throw a coin into the fountain of the Plaça Reial you will come back to Barcelona, and drinking the water from the Canaletas fountain has the same effect. We’ll leave it to you to try it and see if it’s true…

King Martí’s watchtower, which reigns over the Plaça del Rei in the Gothic district, was considered in Medieval times to be the highest building in the world. It’s basically an ancestor to skyscrapers. 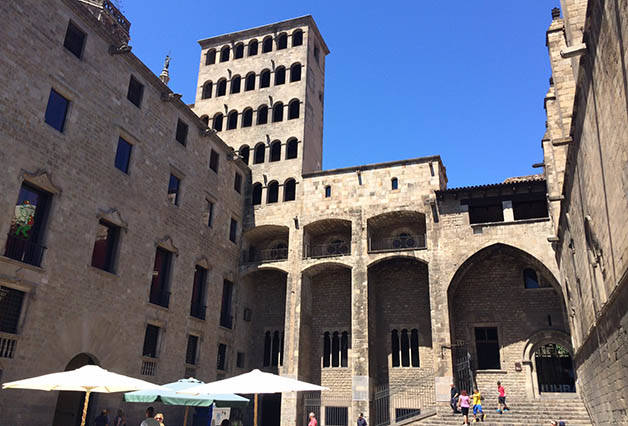 are one of the city’s greatest attractions, but this was not always the case. Swimming in the sea only become popular in the 19th Century, but the rules were strict, and men and women were not allowed to swim together. Sant Sebastià beach was the only one that allowed both men and women. And not without scandal! 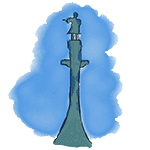 Between the Ramblas and the port there is a statue of Christopher Columbus. Standing, he points towards the distant horizon, and many people wonder what he is pointing at.

14. The hidden tank of Parc Güell

Under the hypostyle room of Parc Güell hides a tank that collects rain water from the square surrounded by the famous curved and colourful benches (just above the hypostyle room), which then runs through little channels hidden in the room’s columns. This rain water then supplies water to the dragon fountains as well as other areas of the park. It’s an example of environmental awareness that’s well ahead of its time!

15. The dragon with umbrella

An impressive dragon sculpture is hidden in one of the facades of the Ramblas. In a style that mixes Chinese and art decor influences it is holding a lantern and an umbrella. Weird? Not really. The building was formerly an umbrella shop and the dragon was designed to advertise the items for sale. 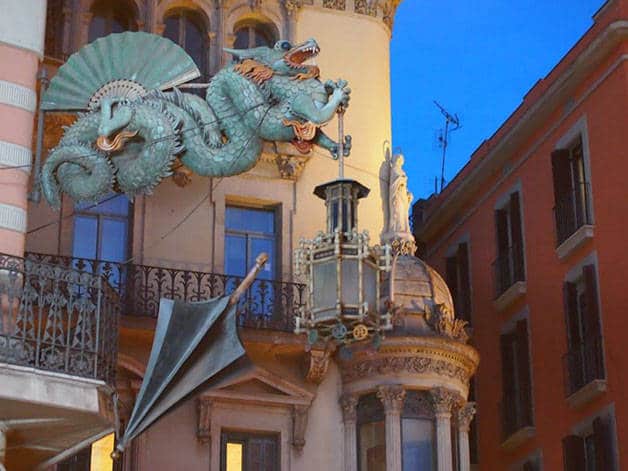 16. The oldest house in Barcelona

The oldest house in Barcelona is found at number 6 Sant Domènec del Call street, in the Gothic area. Inhabited in the 12th Century, the walls now lean, following an earthquake in 1428.

The god Hermès appears numerous times on the city’s buildings: inside the Basilica of Santa María del Mar, on the post office building, Via Laietana, Palau Robert, on the Arc de Triomf… he is everywhere! This dates from the 19th and 20th centuries during the commercial shift in Barcelona. Hermes was the patron saint of shopkeepers, who used him to bring good luck and money.

We associate Gaudí with masterpieces such as the Sagrada Familia and Park Güell but he completed many other works for the city of Barcelona, including 6-branch lanterns that today light up the Plaça Reial.

On the Portal de l’Àngel, a large pedestrian shopping street you can see a fountain covered in colourful tiles. these are old public washing places form the medieval era. The tiles were added later to give the fountains a touch of the art nouveau style that was popular at the time.

The Plaça Reial is bursting with symmetry. However, this effect was obtained by the architect by creating an optical illusion. The square is not rectangular but actually trapezoid. Furthermore, the columns are not all the same height, which paradoxically increases the symmetrical effect. 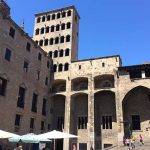 Museum of the history of Barcelona: a surprising tour of ancient and medieval sites 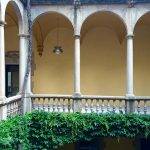 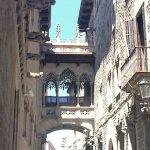 A weekend discovering the history of Barcelona