Home > Visits > Plaça Reial: one of Barcelona’s most beautiful squares

Plaça Reial: one of Barcelona’s most beautiful squares

Plaça Reial is a compulsory stop on any tourist itinerary. Packed with cafés and restaurants, featuring elegant arcades and a magnificent fountain, it's a handsome and lively place to visit. 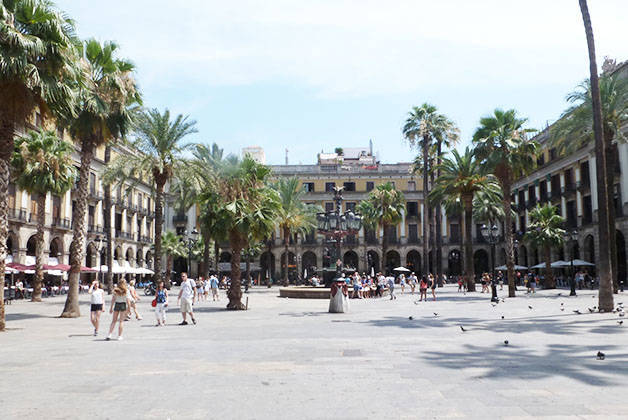 Plaça Reial (Royal Square) is one of Barcelona’s most iconic squares. It’s also one of the most beautiful, with its perfect proportions, its rows of majestic arcades, its wrought iron lamp-posts and its palm trees – all in all, a very photogenic location!

Plaça Reial is located at one end of Las Ramblas, in the Gothic quarter. However, its architecture is nothing like that of the neighbouring streets, and follows the classical style popular in the 19th Century.

History of the Plaça Reial

The site of the Plaça Reial was formerly home to a Capucin convent. In 1835, the convent burnt to the ground, and the city planned to build a theatre in its place. A competition was held to choose an architect, but the Liceu theatre was opened before any progress could be made. Located on Las Ramblas, mere metres from the proposed site, it made the construction of another theatre seem nonsensical.

The new plan was to construct a building in hommage to the Catholic Kings at the centre of the site (hence the name – Plaça Reial), but this plan, too, fell through. Eventually, a French-made fountain took its place: the Fountain of the Three Graces.

Built in the neoclassical style, the square immediately attracted Barcelona’s most affluent classes, who appreciated the lively and elegant atmosphere. Cafés and restaurants began to pop up under the arcades, protected from the heat of the sun. Over time, the Plaça Reial came to attract those from more modest backgrounds.

Attractions of the Plaça Reial

The breathtaking beauty of the Plaça Reial is the result of the architect’s efforts to create an impression of perfect symmetry, using two surprising tricks. Firstly, the square is not rectangular: it’s a trapezoid. Secondly, the distances between columns are calculated differently depending on their distance from the viewing point.

The square is also home to one of Gaudí’s first public works: the lamp posts. They feature one of the architect’s favourite themes, Catalan identity. The upper part of the lamp posts features a helmet with a dragon, recalling the Catalan conquests of the middle ages.

Plaça Reial is a great place to watch the world go by. It’s a fascinating place, and there’s always something going on: the terrace being set up at a restaurant, a group of friends meeting up, glasses chinking, tourists sitting on the edges of the central fountain… a whole living soap opera!

Life on the Plaça Reial doesn’t die down after dark. The square’s many bars and restaurants are constantly full, although the crowds are mostly made up of tourists and foreign visitors.

One night-time attraction is the Jamboree. The venue plays host to top-quality jazz concerts and flamenco, and there’s also a club area to dance the night away.

Plaça Reial is magnificent, and attracts a lot of tourists. This has inevitably led to a certain loss of authenticity in terms of the businesses present in the square, although the phenomenon is less flagrant than on Las Ramblas.

If you’re looking for somewhere pleasant and popular with the locals, head to Ocaña. This bar and restaurant is something of an institution in the city, and has always been known for its originality. The name “Ocaña” is that of a famous transvestite, icon of Barcelona’s urban counter-culture during the 20th Century. The Glacial is another nice café, with French owners.

Note that prices around the Plaça Reial are generally somewhat higher than average. You’re paying for the scenery…