Castells are human towers that make up an integral part of Catalan culture. Do not miss the chance to see them during your stay! 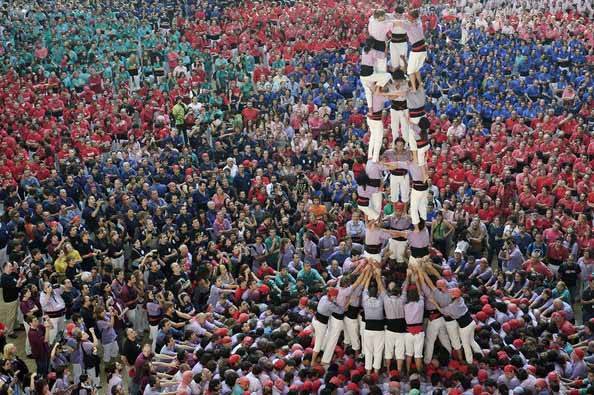 Since the 18th Century, one of the strongest traditions in Catalonia is the formation of castells (castles in English), human towers several storeys high. Public performances regularly take place, particularly during public demonstrations in Barcelona and all over Catalonia.

History of the castells

The origin of the castells is uncertain, but it is thought that they came from old Valencian dances that ended with little human towers. Over time, these towers acquired importance and became an entire discipline in their own right.

While Catalan symbols such as the national anthem, the sardana, the flag and of course the language were forbidden under Franco, the castells were never prohibited. However they were more or less abandoned before coming back into fashion in the 1980s during the democratic transition.

Since 2006 the castells have been registered on the UNESCO intangible cultural heritage of humanity list.

What are castells exactly?

How the castells work


The castells are static human towers of 6 to 10 storeys. In principle, it’s always a child wearing a helmet who climbs to the top. The castell is finished when the child raises their arms in the air, but it’s not valid until all the participants are back on the ground, so there’s no risk of falling.

Castells are made to the beat of music called “toc de castells”: the castellers follow the melody to coordinate their movements. Before each castell, there’s the “toc d’entrada a la plaça”. The castells are then generally followed by a meal to which the audience is invited, and the song “toc de vermut” is sung.

As you can tell, everything is carefully orchestrated!

Composition of the castells

The castells are divided into three parts:

The most robust castellers (participants in the castell) go at the bottom of the castle. The higher you go, the lighter and more agile the castellers are.

An authentic and unique experience: attending a castells rehearsal 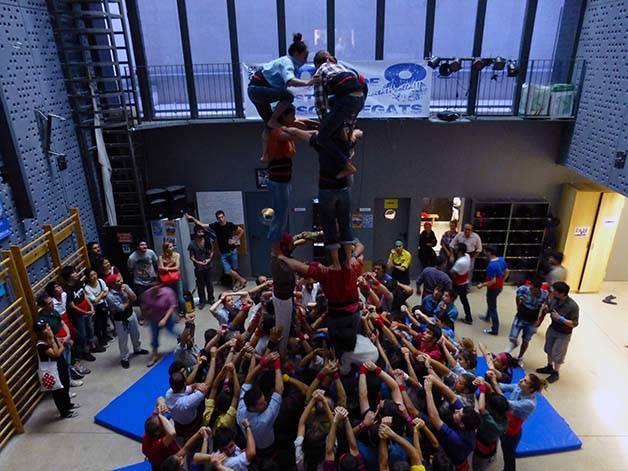 If you’re tempted to get backstage of a castells performance you’re not wrong, as it’s a very exciting and unusual experience.

We had the chance ourselves to witness the preparations for a castell by participating in a guided tour offered by the Gràcia association. We loved it!

The guided tour is divided in two parts:

Enjoy the unique experience of attending a rehearsal Click here

The evolution of the costumes over time

As the castell originates from Valencian dance, the first castellers were dressed in the same costume as the dancers: light coloured trousers and shirts, a sort of little skirt worn over trousers, a scarf, a handkerchief on the head, bells on their ankles and castanets in their hands.

However, this attire often proved uncomfortable and unsuitable for making a good castell. Today, the traditional costume is made up of white trousers, a flannel belt called a faixa, a shirt and a bandana. Only the castellers at the pinya wear shoes, the rest are barefoot. Children also wear helmets for safety reasons.

The castellers are organised into teams (colles) and compete against each other in various competitions. The aim is to make the most impressive castell. To be recognisable, all the member of the team wear the same colour shirt.

Where and when can you see castells?

Castells generally happen on Sundays at noon on the town hall square between June and October. They are always part of the Festes Majors of the different areas of Barcelona and during the popular Catalan festivals, such as Catalonia day (11th September), the Mercè holiday (24th of September), etc.

Do not miss them, it’s a great authentic collective moment!