Bus: Info, timetables, prices and advice for getting around the city

It's not always easy to find your way among all the bus lines, but with our advice, traveling around Barcelona by bus should be child's play!

If you don’t know Barcelona, it’s a little more complicated getting around by bus than by metro.

The reason is simple: the bus route map is not displayed on Barcelona buses so it is difficult to know where you are and you have to be vigilant. Luckily a screen inside the bus shows the name of the next stop, as well as connections.

There are a lot of bus lines in Barcelona, that’s why it may be difficult to know which one to take!

You can check the map of the Barcelona bus lines on this link.

Buses generally run from 6am to 10pm and there are screens indicating the wait time for each bus at every stop.

Complete information on Barcelona bus prices can be found in our article on Getting around Barcelona by metro, bus and tram. Take a look!

Note: children aged 4 and over must pay.

Buses are equipped for travellers in wheelchairs, or buggies and suitcases.

Between 10pm and 6am only the NitBus (night buses) run. They are the same price as the day buses and they all leave from Plaça Catalunya. Night bus numbers always start with the letter N. 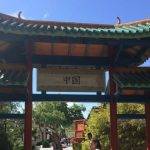 Getting to Port Aventura by bus, train or car from Barcelona